Over the weekend, in addition to Choosing Joy, Emma and I “chose pizza”.  They just opened up a new Shakey’s Pizza not far from our house.  I had not been to or seen a Shakey’s since I was a kid, living in Astoria, Oregon. We decided to check it out.  The pizza tasted just like I remember it and was pretty good.  That’s where the similarities end.  The sign outside said established in 1954, so maybe I was hoping for more of a step back in time than I got.  Here is the pizza….we went with the ole standby…. 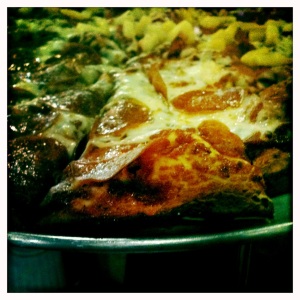 I remember the Shakey’s in Astoria pretty vividly.  The exterior had these really cool glass bulb/circle like windows, in different colors.  It let light into the building, without actually being a window.  It made for a pretty cool atmosphere.  When you walked in, you could order your pizza, then go over to the long window with a ramp where you could stand and watch them make the pizza’s.  (I’m sure the employees loved being watched by 7 yr old pizza critics all day long).  But being 7, it was pretty fascinating to me. There were a couple of pinball machines in the corner. The only video game I remember was the pac-man game that was under glass in a table.  So you sat at the game, looking down through the glass table at the video screen. Those of you that are OLD, like me, will know exactly what I’m talking about.  It was so cool.

The Shakey’s we went into last night, first of all, had a bar!?  And a big screen TV.  You still ordered from the counter and then sat down to wait for your food, but alas, no pizza creation “viewing area”.  Sad.  At the far end of the restaurant, was a kids game room…..like Chuckee Cheese (a.k.a. parents hell).  I was NOT happy to see this…..and gave a huge internal sigh as soon as Emma saw it.  It was complete with those tickets that spew out of the games, that kids can turn in at the “prize” counter, for a cheap toy. I hate this mad scramble for as many tickets as you can get….rather than casually enjoying some fun games, it ends up turning into a bloodsport, for both the kids AND the parents.  Ugh.  I can’t believe how competitive some of these parents get, all for something that will most likely get lost in the car on the way home, or ends up in the trash soon after. So much for a relaxing evening out at the local pizza parlor.  It quickly turned into a timed event to see how quickly she could finish dinner and get to those GAMES! I’ll admit, there was one plus in the game room, they had old school ski-ball.  I LOVE ski-ball!  I could play it for hours!!  Emma likes it too. 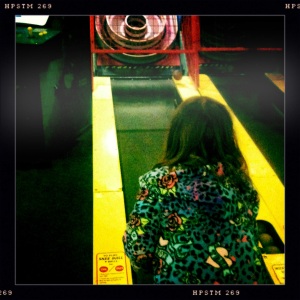 So we only purchased the MINIMUM of “tokens”, so Emma got to play some games.  She did enjoy several of the games that DIDNT vomit out tickets (heaven forbid), like ski-ball, and a boat racing game called H2O something….. Here she is boat racing 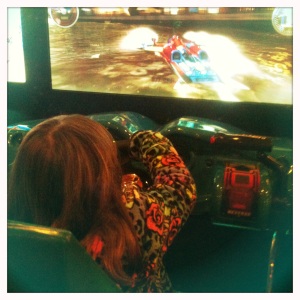 When we counted up the tickets, and only had enough for a necklace at the crap counter, I mean “prize” counter…it led to a meltdown.  This was NOT okay with me.  As soon as we got to the car, we had a long discussion about being thankful for what we have.  What are the things we really need in life? Food (pizza), water, shelter, love, and each other.  THOSE are the essentials, everything else is just “frosting”.  A fun bonus. She got it. The tears dried up, and we ended up having a great rest of the evening.

I don’t plan on going back anytime soon, unless they bring back the table pac-man, the pizza creation viewing, and LOSE the whole game ticket RACKET they have going on in there.  So parents…be prepared if you plan on going to dinner there.  🙂